KOMMERSANT, 06/22/99 - During the meeting of the Presidents of Russia and the USA in Cologne Boris Yeltsin presented Bill Clinton with a very valuable gift - a file of documents from Russian archives concerning the murder of President John F. Kennedy in 1963. The Deputy head of Russian President Administration, Sergey Prikhodko told our correspondent yesterday that despite the fact that "the documents do not contain particularly new facts" they were "priceless for researchers."

The first person who pledged to give the file to the Americans was Vadim Bakatin, head of the KGB in the USSR in 1991. The file focuses on Lee Harvey Oswald (the President's assassin, according to official records) and, in particular, his stay in the USSR. Bakatin did not fulfil his pledge.

In 1993, Bill Clinton requested that Boris Yeltsin send him Kennedy's file, as it was the 30th anniversary of the murder in Dallas. The American President's request was fulfilled 6 years later.

"A very interesting present" - is how Bill Clinton's Security adviser, Sandy Berger described the documents. The Kremlin also thought that the gift was impressive: any information from the Russian archives concerning the J.F.K. murder, especially that which recently lost its "classified status," is obviously of great interest in the USA.

As was stated in the conversation between Boris Yeltsin's press-secretary Dmitry Yakushin and our correspondent, most documents were chosen from two archives - The Ministry of Foreign Affairs, and the President's archive. In total, the Americans received 80 pages of documents, in particular, the recently declassified data on Lee Harvey Oswald's time in the USSR from 1959-1962. For example, the documented evidence that Oswald wanted to obtain Soviet citizenship, and also Soviet Government documents with texts of secret State telegrams and decrees, and a message from the Soviet Ambassador in Washington about the US President's assassination. The President's Administration has kindly agreed to give some of these documents to our correspondent.

It is now amusing to read the extract from the Protocol of Meeting of the Presidium of the Central Committee of the CPSU stamped with the words "top secret," alongside the list of names of the Soviet delegation members sent to Kennedy's funeral. The same stamp also adorns the letter from Gromyko and Semichastni to the Central Committee about "the slanderous allegations of the American press about some 'connections' between Oswald and the Soviet Union." Judging by the documents obtained by our correspondent, the materials received by the Americans highlight the peculiarities of bureaucratic relations within the Soviet Government, rather than the circumstances of Kennedy's murder.

However, the main thing here is not the degree of sensation produced by the documents, but Yeltsin's "kind" gesture coinciding with the "Big 8" Summit in Cologne. The Kremlin does not deny the significance of such a gesture. Sergei Prikhodko frankly admitted as much to our correspondent: "The result of the long and scrupulous work of our historian was made to coincide with the Summit." 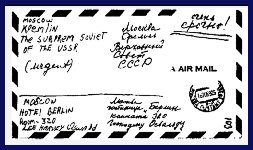 I, Lee Harvey Oswald, am asking to be granted citizenship of The Soviet Union. My visa is valid from 15th of October and expires on 21st of October. My citizenship should be granted before this date. In the mean time I am waiting for your decision about my citizenship.

Currently I am a citizen of the United States of America. I want citizenship because I am a Communist and working class person. I have lived in a decadent capitalist society, where the workers are slaves. I am 20, I served in US marines for three years, I served in occupation forces in Japan. I have seen American militarism in all its forms.

I do not want to return to any other country outside of the Soviet Union's borders.

I wish to reject my American citizenship and accept the responsibility of a Soviet citizen.

Note from translators: The writing on the graphic of the envelope in Russian appears to be in a different hand, and from what we can decipher, is simply translating what appears in English. The phrase, "very urgent!" is underlined twice at top right of the envelope, and MAY be in a hand similar to Oswald's, but that is really speculation.

Translations © 1999, 2008 Clint Bradford. All rights reserved.
Gromyko and Semichastni letter
to the Central Committee of the CPSU

Central Committee of the Communist Party of the Soviet Union
Secret, Copy No 1

Central Committee of the CPSU

The American Press is spreading various slanderous allegations about some "connections" between Oswald and the Soviet Union and Cuba. Oswald, accused of assassinating the President of the USA J. Kennedy, was later killed under mysterious circumstances. Some representatives of the American press are trying to justify their insinuations referring to the fact that Oswald had been in the Soviet Union from October 1959 till June 1962.

The Ministry of Foreign Affairs of the USSR and the KGB of the Council of Ministers of the USSR have prepared a statement for the Soviet press with the purpose of exposing these allegations of the American press. The draft for this statement was based on the fact that now, after Oswald has been killed himself, the real face of those circles who are responsible for the killing of President Kennedy, and who are now trying to cover their tracks, is more evident. The question of expediency of such publication requires special consideration taking into account subsequent development of the situation in connection with investigation of the circumstances of Kennedy's assassination.

If American authorities contact the Soviet Embassy in Washington with a request to supply them with some information regarding Oswald's stay in the Soviet Union, they can be provided with a relevant reference document relating to it.

The draft of the statement attached.

Asking for your consideration.

Translations © 1999, 2008 Clint Bradford. All rights reserved.
On measures in connection with the
funeral of the President of the USA, John F. Kennedy

The Central Committee of the Communist Party of the Soviet Union

Extract from Protocol No 125 from the meeting of the Presidium of the Central Committee of the CPSU dated 23d of November, 1963.

On measures in connection with the funeral of the President of the USA, John F. Kennedy

1. To delegate the First Deputy of the Chairman of the Council of Ministers of the USSR, comrade A. I. Mikoyan to Washington, to attend the funeral of the President of the USA, John F. Kennedy.

2. Comrade A. I. Mikoyan is to be delegated to the USA together with comrades M. N. Smirnovski, V. V. Smolnichenko, V. M. Sukhodrev, and also three other accompanying persons.

3. To order the State Air Force Headquarters of the Council of Ministers of the USSR (comrade Loginov) to allocate a special plane for the flight of comrade A. I. Mikoyan and his accompanying persons to Washington and back.

4. Expenditures for the trip of comrade A. I. Mikoyan and his accompanying persons to be paid for by the Reserve Fund of the Council of Ministers of the USSR.

Secretary of the Central

Researchers:
High-resolution copies of each of these documents - as well as a copy of the Kommersant newspaper article - are available. Please send email.